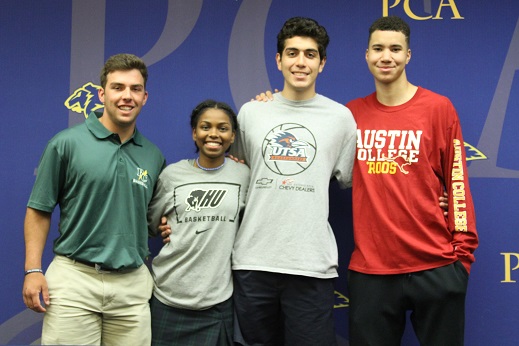 “I am proud of these four student athletes that we are honoring today,” said PCA’s Athletic Director, Chris Cunningham. “They are not only athletically talented, but they have hearts for the Lord, and we are excited to see them represent Prestonwood Christian Academy next year.” Senior defensive specialist and shooting guard Jasmine Barnes signed to play women’s basketball at Harding University in Searcy, Arkansas. Barnes has been a four-year letter winner for the Lady Lions, and each year the teams advanced to the Final Four TAPPS State basketball tournament. The Lady Lions were State Runner-Ups during her freshman and sophomore seasons, and the teams advanced to the State Semi-Finals during her junior and senior years. "We are so proud of Jasmine for accomplishing her goal of playing college basketball, for working hard this past season and off-season to be able to play at a school that aligns with her spiritual values, offers a rigorous academic program and continues to promote Kingdom athletics,” said PCA Varsity Girls Basketball Coach Holly Mulligan. “Harding University is a perfect fit for Jasmine in so many ways. Her defense, shooting ability, love, and leadership will be missed, but we are very excited for her new journey." Sam Boese signed with Richland College to play baseball next year. At PCA, Sam played multiple positions on the diamond, including catcher, pitcher, first base and outfield. In addition to his two years as a member of the Lions Varsity Baseball team, Sam was also a member of PCA’s Varsity football team. Varsity Baseball Coach Mike Maack said that Sam is a “great teammate and great team player!” Matthew “Mateo” Escheik signed to play basketball next year at the University of Texas at San Antonio. Escheik is a two-time TAPPS State Champion, winning rings during his sophomore and junior years, and went to the Final Four TAPPS State basketball tournament during his senior year. This year, he averaged 14 points and seven rebounds per game and was the team leader in free throw percentage. He was named TAPPS 2nd Team All State and First Team All District. “Mateo was a two-year starter and one of our most consistent players,” said PCA Varsity Boys Basketball Coach David Conrady. “His improvement over the past two seasons was a major factor in our team’s success. He is a quality young man who excelled on the floor and in the classroom. I am excited that Mateo will have the opportunity to continue his basketball career at UTSA.” Nathan McKenzie signed to play basketball at Austin College after he spent his senior season as the Lions’ top reserve playing the post position. During his senior season, he averaged five points and three rebounds per game and the team advanced to the Final Four TAPPS State basketball tournament. Nathan was also a member of the TAPPS State Championship team from his junior season. “Nathan McKenzie was the consummate teammate, said PCA Varsity Boys Basketball Coach David Conrady. “His willingness to sacrifice his personal goals for the team was a major factor in our success over the past two seasons. Nathan played a significant role over the past two years coming off the bench. His stats do not reflect the impact he had on this team and his teammates both on and off the court. His best basketball is in front of him."